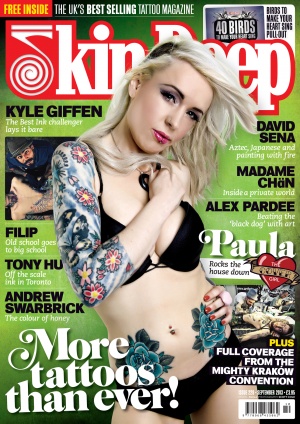 Congratulations to our head Wildside Girl Paula who is this month’s cover feature in “Skin Deep” magazine! Issue 228 is still available on sale or from the website here – http://www.skindeep.co.uk/

As this month’s “Tattoo Vixen” you can find her on page 28 in a 4-page interview, with an awesome photoshoot done by the talented Scott Cole.
Well done Paula! (and thanks for all the Wildside plugs in the article too!!)

We’re also pleased to announce that some new Wildside Girlz will be joining the team starting this Saturday at September’s Wildside! Event page here – https://www.facebook.com/events/502393843170394/ 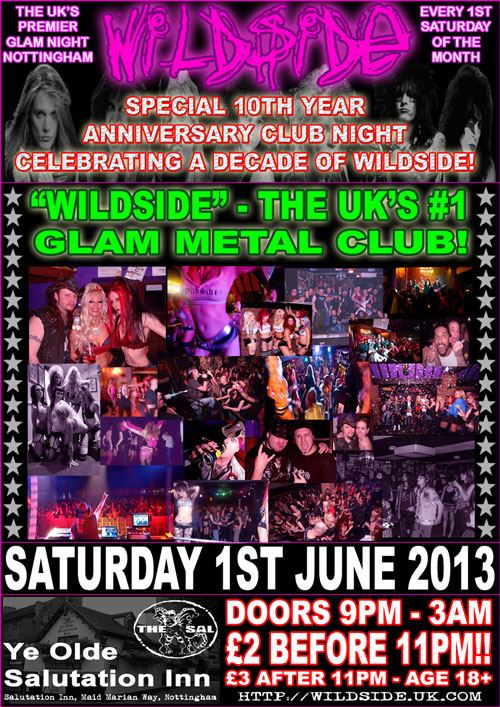 WILDSIDE IS 10 YEARS OLD TODAY!!! Head over to our BIO page for a cool pictorial history of 10 years of Wildside! And we’ll be celebrating a decade of glam, sleaze and hair metal as the UK’s premier glam night and Nottingham’s longest running independant rock night TONIGHT at the Salutation Inn! It’s time to come and PARTY ON THE WILDSIDE once more and sing us happy birthday!! In the main room upstairs you will have DJ (AL) WILDSIDE (Glam/Hard Rock/Cheesy Fun Party Tunes!).
*** With the WILDSIDE GIRLZ podium dancers!! ***
Only Â£2 before 11pm! (Â£3 after 11pm)
The downstairs bar is free entry all night with DJ Johnny Fangz playing a mix of rock and metal!
Facebook Event Page 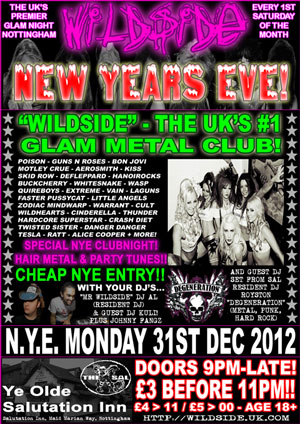 So Xmas is all but over now, and New Years Eve is nearly upon us…. it’s time to come and PARTY ON THE WILDSIDE! Yes don’t forget – there is a Wildside NYE clubnight this year in our regular venue of The Salutation Inn. From 9pm till very very late (normally gone onto 4am-ish…) we will be bringing you the ulitmate party of the year to end 2012! In the main room upstairs you will have DJ (AL) WILDSIDE (Glam/Hard Rock/Cheesy Fun Party Tunes!), PLUS Guest DJs…. DJ Royston – The Salutations resident DJ and he’ll be representing his DEGEERATION club night with metal, punk and everything else that your mother would hate! AND! DJ Kuli (“Lady Wildside”) – Also from the Dirty/Filthy/Sexy clubnight, Kuli will be bringing his unique taste to proceedings with a smattering of rock, glam, funk, pop and alternative tunes!
*** With the WILDSIDE GIRLZ podium dancers!! ***
Only Â£3 before 11pm! (Otherwise Â£4 between 11pm and midnight, Â£5 after midnight)
The downstairs bar is free entry all night with DJ Johnny Fangz playing a mix of rock and metal! 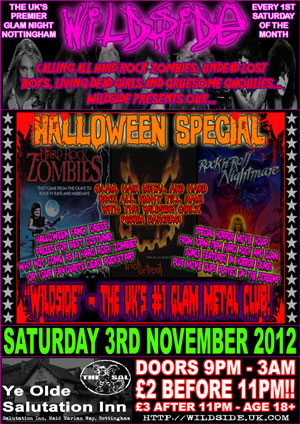 Yes! Seeing as the November Wildside is the closest weekend to Halloween we’ve decided to theme the night around it! Calling all hard rock zombies, undead lost boys, living dead girls and gruesome ghoulies….. get your fancy dress on! Bonus points for dressing as your favourite dead rockstar (…always in good taste is Wildside!) and prizes to be won for the best costume! And for a special hour (10pm-11pm) we will be only playing hard rock and glam songs from horror films … so expect some “Dream Warriors”, “Bring Your Daughter To The Slaughter”, “Pet Cemetary” and many more … from such bands as Alice Cooper, WASP, Fastway, Vinnie Vincent, etc! Of course it’s not all tacky Halloween overload – no – there will be the usual incredibly tacky and cheesy glam all night too!

With your resident DJ Wildside and the Wildside Girlz on the podiums of course! All till 3am and with a super cheap entry of Â£2!! (Before 11pm). Entry is free downstairs with DJ Johnny Fangz doing a great mix of classic rock and metal. But get there early though to hear some rare and usually unplayed glam classics!! The venue is of course The Ye Olde Salutation Inn on Maid Marian Way. 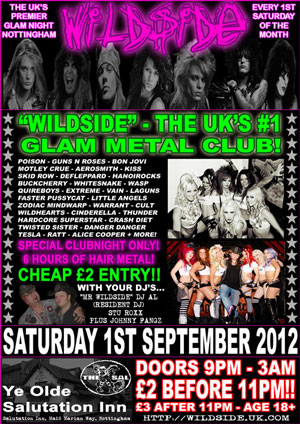 Wildside clubnight returns tomorrow night! (Saturday 1st September) Again it’s another special club night only and a super cheap entry of Â£2 before 11pm! This month DJ Stu Roxx returns alongside resident DJ Al for a full on 6 hours of glam-metal mayhem! Not forgetting the gorgeous Wildside Girlz on their podiums too! Last but not least with DJ Johnny Fangz downstairs playing a mix of classic rock and modern metal all night long too! Doors are at 9pm and we’ll be carrying on till 3am! Get there early though to hear some rare and usually unplayed glam classics!! The venue is of course The Ye Olde Salutation Inn on Maid Marian Way.


Wow! What an amazing night and how honoured we were to be invited to close the Bloodstock festival in the main tent – to over 3000 screaming mad metal fans!!! Check out the full video footage below, truly awesome!!

Bloodstock is the UK’s largest independant metal festival, with this year over 11,000 metalheads attending to watch Alice Cooper, Machine Head, Paradise Lost, Dimmu Borgir and many many more over 4 days of insane metal madness! Inviting the UK’s premier glam-metal night to bring the party to the final night was daunting task, but one we (DJ Al and The Wildside Girlz) relished and truly brought a spectacular end to the festivities along with the resident “4 DJs Of The Apolalypse” and their crew who also did an amazing job and we thank them for being so accomodating too! Highlights for us was the spectacular “Living On A Prayer” singalong and the crowd going nuts to “Jump” as per the below video clips highlight!!

Thank you again Bloodstock and your amazing crowd! I hope we can be invited back again!!!


Wildside to do final night in the main tent at the Bloodstock Festival!

WILDSIDE is very proud and excited to announce that we have been invited by the BLOODSTOCK FESTIVAL to bring the party and our clubnight to the final night in the main tent!! Just after the mighty ALICE COOPER finishes onstage make your way
across to the Sophie Lancaster Stage and main beer tent for the ultimate party rock night! We of course will be bringing the Wildside Girlz podium dancers and working alongside the “4 DJs Of The Apocalypse” metal DJs to end the festival on one hell of a party!!

BLOODSTOCK OPEN AIR 2012 takes place at Catton Hall August 9th â 12th. This years lineup features Alice Cooper, Machine Head, Anvil, Dio Disciples, Iced Earth, Testament, Sepultura, Dimmu Borgir, Paradise Lost and many more! Bloodstock is the UK’s largest independant metal festival with an attendance well over 10,000 each year now, and the main tent where Wildside will be on the Sunday night holds up to 4,000 – so this will be the biggest Wildside ever!! 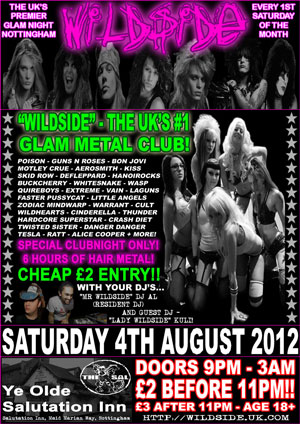 Don’t forget guys! Wildside returns this Saturday for a massive special ‘club night only’ with guest DJ ‘Lady Wildside’ Kuli! You can find the Facebook event page by clicking HERE so let us know if you are coming and if you have any requests for the DJs!

WILDSIDE IS BACK! AND WE RETURN ON THE 1ST SATURDAY IN AUGUST WITH ANOTHER SPECIAL CLUBNIGHT ONLY!!

Entry is just Â£2 before 11pm!
Plus we have a guest DJ “Lady Wildside” himself… Kuli! As typical he will be bringing a different take on things and playing Wildside tunes not normally heard and a little off the wall! Of course DJ Al will be there as always! Get there early to hear more rare stuff before the main clubnight gets into full swing!

WILDSIDE CLUB NIGHT IN THE MAIN ROOM
From 9pm – 3am!!

IN THE DOWNSTAIRS BAR
Free entry all night – DJ Johnny Fangz playing a mix of rock and metal!

With the WILDSIDE GIRLZ podium dancers!!

Welcome to the new look website – it’s only been 4 years in the making! DOH! Hope you like it, but this is still a ‘temporary site’ – the super-duper awesome one is still being built using the latest software and techniques to provide a much more interactive experience encompassing and focusing on the news and latest goings on in the glam music world. Mostly to bring things right up to date! But this new site at least we will be able to keep much more up-to-date with the latest goings on compared to the old one. Hope you like and any problems you find do let us know!